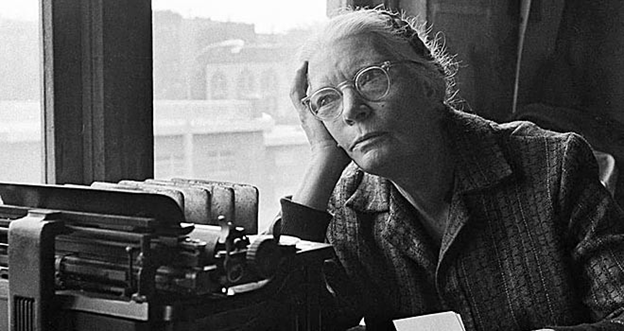 Lessons of the 20th Century Series

Whatever I had read as a child about the saints had thrilled me. I could see the nobility of giving one’s life for the sick, the maimed, the leper. . . . But there was another question in my mind. Why was so much done in remedying the evil instead of avoiding it in the first place? . . . Where were the saints to try to change the social order, not just to minister to the slaves, but to do away with slavery?

In this series on the 20th Century, I have been trying to show how this eventful era has forced Christians to face some hard questions. In answering those questions, we have had to learn some hard truths and expand our understanding of the faith.

This dynamic came up again during the Great Depression in the person of Dorothy Day (1897-1980). In her response to the great questions of the day, we see a profound challenge to the church at large: “Whom is the church for?” In one sense, it seems like there is an obvious answer to this question: the church is for everyone. Ideally, that would be true.

The Church in the Halls of Power

In reality, since the time of Constantine (272-377 AD), this hasn’t been the case. While there have been some important exceptions, church leadership has largely associated itself with the rich and powerful in society.

Especially in Europe, Bishops and Kings have traditionally worked closely together. In the French Revolution, the Catholic church stood with the collapsing monarchy against populism and democracy. In Russia, at the brink of the Communist Revolution, the church was closely allied with the Tsarist regime as the protector of Holy Orthodoxy. Here, too, it was opposed to worker’s rights.

The Great Depression: A Time of Worldwide Turbulence

For those of us born long after these events, it is hard to appreciate the turbulence of the world in which Dorothy Day lived and began her work in 1932. It is important to understand this world, and how it shaped her answer to the question: ‘Whom is the church for?’

Dorothy Day didn’t answer the question in a systematic theology textbook. She worked out the answers in a world that seemed to have failed. World War I had devastated much of Europe and had destroyed millions of lives. The Spanish Flu had killed millions more. Within two decades, the Great Depression hit with a vengeance, destroying wealth and agriculture. Millions found themselves in poverty and out of work. This drove labour unrest, agitated in part by the rise of worldwide communism following the Bolshevik Revolution in Russia in 1917. Different churches responded to these events in a variety of ways. I want to focus here on Dorothy Day

Day can seem like an unlikely candidate for sainthood. She had a passion for peace and justice, but it didn’t start in the church. From an early age, she was a journalist and activist, working on the staffs of several socialist publications. In 1917, she celebrated the Russian revolution’s toppling of the Tsarist regime, but her anarchist sympathies kept her from loving the authoritarian Bolshevik government.

Throughout the early 1920’s, she lived a bohemian lifestyle. All the while, she continued her journalism, covering everything from striking iron workers to interviewing Leon Trotsky. Then in 1925, she found herself to be pregnant during an affair with the English botanist, Foster Batterham. This surprised her because she had thought herself unable to conceive following an earlier abortion, which she later called “the great tragedy” of her life.

Becoming pregnant was a great joy for Dorothy Day. Out of this joy, she started rethinking religious faith. She had always assumed that religion was just what Marx called ‘the opiate of the masses.’ Religion was supposed to be a crutch for suffering people to give them hope. But here she found herself praying, not because she was unhappy, but because she was so happy. She later explained it like this: “The final object of this love and gratitude was God. No human creature could receive or contain so vast a flood of love and joy as I felt after the birth of my child. With this came the need to worship, to adore.” She came back to faith and had her daughter baptized. Batterham left, having no desire to be a father.

Coming to faith didn’t change Day’s convictions about peace and justice. She was as passionate as ever. Everywhere she looked, she saw the sufferings and injustices that the masses of humanity were enduring. What changed was her vision. When her leftist friends struggled to understand her new interest in faith, she told them that Jesus was promising the new society of justice they were looking for. Faith just gave her the next step.

In 1932, she met Peter Maurin. He was an odd fellow. Day later described him as “a genius, a saint, an agitator, a writer, a lecturer, a poor man and a shabby tramp, all at once.” During the Great Depression, he had lived with a parish priest. He did odd jobs, all the while devouring the priest’s library. He read everything from Aquinas to St. Francis to the papal letter on Labour, Rerum Novarum.

When Maurin met Day, he outlined his vision. He felt that it wasn’t enough to denounce injustice. Instead, one must also announce a new social order and try to live it out. His vision had three parts. First, to create a newspaper to tell the story of this new vision. Second, to create Houses of Hospitality in which the poor could obtain shelter, food and clothing. And third, to create rural cooperatives. In this vision, Day discovered what she was made for. Where Maurin never had the ability to put his ideas into reality, Day found her calling.

She moved quickly. The first issue of the Catholic Worker was published on May 1, 1933. It has been in continuous publication ever since. The newspaper focused on what it meant to imitate Christ in the midst of the Great Depression. For Day, dealing with labour issues was central. Her biggest competitor was the Communist Daily Worker. Day opposed the Daily Worker’s promotion of class warfare, Marxism, atheism, and abolition of private property. She envisioned a publication about ‘work and men and the problems of poverty and destitution and man’s relationship to his brothers and to God.’ The newspaper was hugely popular and influential, running a subscription of over 100,000 early on.

Houses of Hospitality: Meeting Christ in the Poor

Day wasn’t just a journalist. The hopelessness of the unemployed millions shook her profoundly, and she felt the need to spend the rest of her life serving them. This was the role of the Houses of Hospitality, places where volunteers committed to live and work alongside the poor as well as to serve them. People would stop in for meals and encouragement by the hundreds.

“As far as Dorothy could tell, (Christ) demanded the readiness to wash vegetables, cut bread, and clean up after hundreds of noisy, often ungrateful guests, day after day, year after year.” 1

For Day, this work was all about Jesus Christ. She cultivated the unique ability to see Jesus everywhere: “Wherever she turned, Dorothy saw Christ up on his cross. One of her rules of life was to seek the face of Christ in the poor. She found him there, and in so many other places. Christ was the person in line for soup and bread; Christ was the drunk woman having the same conversation over and over again; Christ was the enemy combatant; Christ was the priest she disagreed with; Christ was the young person begging for spiritual direction; Christ was in every reader she wrote for.”1

The Fight for Justice

Day never stopped agitating for justice. She continued to support unions and the rights of workers. She showed up on picket lines and wrote about them in her paper. In California, she stared down the police. People called her a communist. She was jailed, shot at, and ridiculed. The FBI continually investigated her.

Her lowest point came from her commitment to pacifism. She denounced the U.S. entry into the Second World War, which caused her to lose thousands of subscriptions. None of it disturbed her. She always felt that she was just walking the way of the cross. Day kept her focus on Christ until the day she died in 1980.

Solidarity with the Poor

Through it all, she only owned a creaking bed, a writing desk, an overflowing bookshelf, a teapot, and a radio. She followed the tradition of the many Christians who lived in poverty out of love for the Gospel.

What made Day different was that she represented a new kind of holiness. It wasn’t just about prayer and sacrifice, though she was very faithful in church attendance and daily prayer. It also wasn’t just about serving the poor, though she did this daily for decades. The newness in her expression of faith in Christ came from her commitment to live in solidarity with the impoverished masses and to struggle with them in the path of justice.

Hers was a very political Christianity. I began this reflection with Dorothy Day’s guiding question, ‘Whom is the church for?’ Her life embodies her answer: above all things, the church should stand in solidarity with the poor, because one finds Jesus there. As her master said, “I was hungry, and you gave me something to eat; I was thirsty, and you gave me something to drink… whatever you did for one of the least of these brothers and sisters of mine, you did for me.” (Matthew 25: 35-40)

Day’s witness has forced several generations of Christians to ask hard questions about the church’s relationship with the politically influential. We will return to this question in the reflection on Oscar Romero. Day’s story has had such an impact on the church because her holiness is so obvious, her vision so clear, and her commitment is so compelling. Many people, even in her lifetime, saw her as a living saint. She had no patience with this. Her reply was always, “Don’t call me a saint. I don’t want to be dismissed so easily.”

1 From the introduction to The Reckless Way of Love: Notes on Following Jesus by Dorothy Day (Plough Publishing House, 2017). This is a compilation of quotes from her various writings.